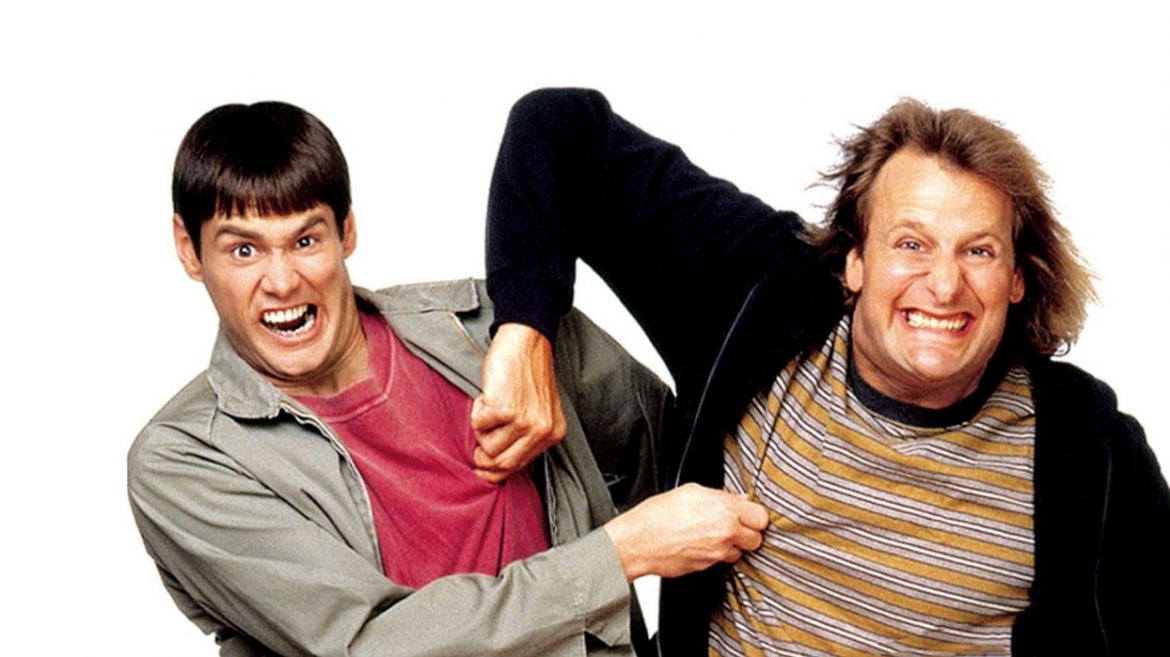 “Think of how stupid the average person is, and realize half of them are stupider than that”. A great quote from the greater George Carlin.

Dumb and Dumber, written and directed by Peter Farrelly, follows Harry (Jeff Daniels) and Llyod (Jim Carrey) as they trek halfway across America in search of Mary (Lauren Holly) to give back her forgotten briefcase.

There is no other film that does stupid comedy quite like this, and I don’t mean stupid comedy where its just poorly written, parody nonsense shite like scary movie 12 or how ever many there are. Im talking about comedy that is cleverly disguised as being stupid that it seems stupid but in reality…. its still stupid, but its perfect stupid.

Jeff and Jim play Harry and Llyod so incredibly incredibly incredibly stupid and its just perfect. You really feel as if you’re watching the two village idiots of two towns try and travel cross country. There’s just so many laugh out loud moments of pure stupidity that makes this film one of the most hilarious ever made and its mostly thanks to these two and their performances. No one can cool their mouths off with ketchup and mustard like these two. No one can pull off orange and blue tuxedos at an high end event like these two. No one can explode out their arse like Harry can and no one can make the most annoying sound in the world like Lloyd can.

One thing that I noticed which is something that kind of goes over my head but in this it sticks in my mind, its such a small detail but its something that you don’t see much but its the attention to the insignificant sound effects. This is such a weird topic for this film but I like to give appreciation to the small details. The sound effect In this film are great, to the point where you can hear him blow salt off the table, any other film you couldnt hear the salt brush off the table but in this you can. There’s many other examples and this is too long a paragraph for it but that’s something I liked so I’m gonna talk about it god damn it, I LIKED THE SOUND EFFECTS, SUE ME!!!

As well as sound effects, the sound MUSIC is also very very well picked. The music in the film is picked wonderfully to emphasise the mood in the film, especially the sad moments, another nice touch for the sound guys there, shouts outs to you.

P.s. only just realise they made an animeted series based on the film with Harry and Llyod getting up to other adventures. Never knew that, just thought I’d point that out.

Overall, for some reason I’ve talked more about sound than I have the comedy of this film but that’s because there’s not much to say other than the fact that it is just down right hilarious and It is Jim Carrey in his absolute prime. Its one of the best, hands down and I feel I have to end it in a really cliche manner but it works to perfect not to so I’m gonna do it, if you you’ve seen the film you’ll read it exactly as its said in the film….. I like it a LOT.