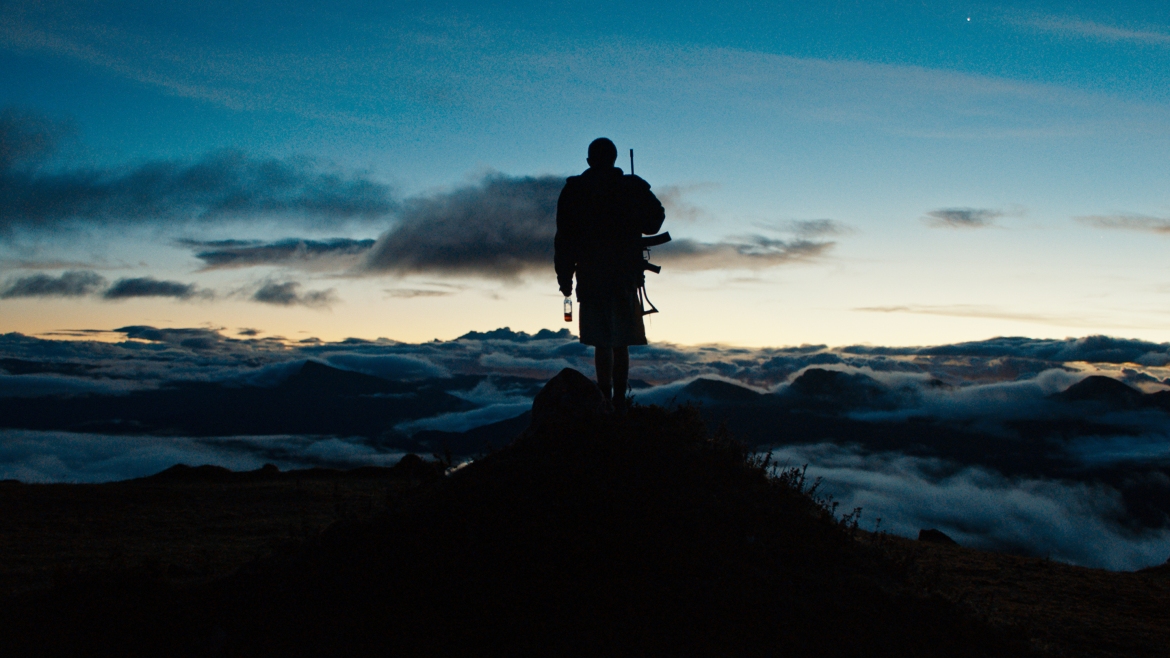 “What part of mummies body does daddy love?”

I think this is a close to being a child soldier I want to be. I mean luckily I’m not a child anymore and I’m not Columbian so I think I’ve pretty much solidified that not happening to me. Unless we invent a time machine that sends people back in time and turns them Columbian then I think I’m pretty much screwed, but at this point I’m glad I can sit in a comfy room and experience the horrors of child warfare with Monos.

Monos, Directed by Alejandro Landes, is a columbian film that takes place on a mountain top and follows a group of 8 child soldiers. They have been allocated a hostage and a milk cow to protect with their lives. The group work together to assure that their mission is completed. Taking part in rigorous military training exercises by day and playing around like kids at night, the team find themselves putting their skills to practice when they are driven down the mountain due to a surprise attack. Each child must work together to ensure their mission is still completed as to not get on the bad side of the mysterious clan that control them called ‘The Organisation’.

The first thing I’ll say about this film is that it is utterly stunning, seriously it is gorgeous. A pastel blue watercolour follows the story the whole way through and makes it such a pleasure to watch, even if what you’re watching is unsettling. The clouds in this film, I’ve never seen clouds look so god damn sexy. If you’re a lover of clouds then you will get a real kick out this. Taking place on a mountaintop where the air is thin and the clouds sit below them, just the whole setting and scenery is so powerful from the get go. It transcends and evolves as the story moves to the jungle and even then it is still as wonderfully depicted through the cinematography by Jasper Wolf. The overall attack of the senses with the visuals to the music is just overwhelming with power to immerse you within this clan of 8.

The groups itself is formed from kids, ranging around the age of 15. We have (I’m gonna try to remember this off the top of my head) Wolf, Lady, Boom Boom, Bigfoot, Rambo, Swede, Smurf and Dog (I couldn’t do it, I got them all apart from the last two). The group are called ‘Monos’ by the representative of the organisation who travels down to keep an eye on them and make sure that everything is still under control. This film very much plays like ‘Lord of the Flies’ which the director has said that it is an inspiration for his work and it works perfect to translate to the war going on in Columbia. All the kids are wonderfully portrayed and really transport you into this world. As mentioned before, they have to take care of a hostage, who they use to spread propaganda to the opposing side of the war, using her to spread messages. The relationship between the 8 and the hostage is a strange one, they treat her nicely but then don’t Invite her to one of their birthday parties which is down right savage, they teach these kids to be cold as hell. We also have the cow which is played beautifully, the way she moos and produces milk is breathtaking and so rare to see these days.

There are so many parts to the story that are so shocking and they are done in such a way that you arent expecting them at all, it’s not overally stuff thats difficult to watch which is what I was expecting, it’s just shot so well that things happen out of nowhere and they really connect with you and pack one hell of a punch. Events like this happening alongside a soundtrack that beautiful and unsettling just creates such a journey that’s unlike one I’ve seen for a while. I was genuinely in awe at the visuals and I was gasping along the way. I would say that the end cuts off in a way that feels a bit sudden, I could happily of watched another hour just to be a part of this world for that much longer. Although that’s kind of a weird thing to say cause I would definitely not want to be there at all but the experience and how it is shot is a huge credit to everyone involved to create a vivid and enchanting masterpiece.

The choice of sound in this film is seriously interesting as well as the director played with sound association which I am such a fan of. When the story teaches you to associate a sound with a character it’s fantastic and creates moments where anxiety would hit you as you could hear a noise and know that a certain character was going to do something. It’s such a clever way to play on the viewers brain and really adds to the experience.

Overall this film is damn close to being perfect, there isn’t anything in particular that I can think of that I didn’t like, maybe just i wish there was a bit more, maybe a bit more of connecting to some of the characters but ultimately this is a journey that seriously should not be missed. It really opens your eyes to the sort of lives that people live out there and what some of these children go through. With a stunning backdrop and masterful music, it was a world I was sucked into a spat out of with me forgetting i wasn’t in a rain forest. It also sparked a fear in my that I didn’t know I had, in one part a character is surrounded by thousands of mosquitoes and flies and they’re frantically trying to swat them away, it’s only brief but that hit hard. Remind me to wear a suit made put a mosquito net if I ever go to the jungle.

The Spongebob Movie: Sponge Out of Water