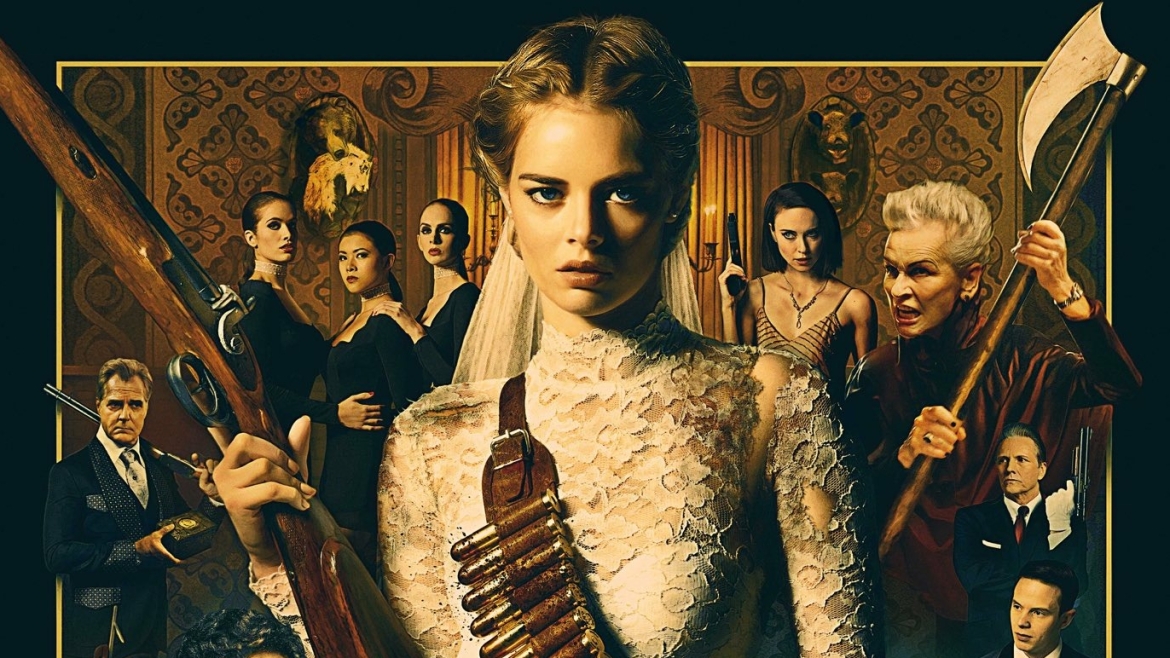 “Put the maids in the goat pit”

Before anything else I have to tell you how you need to watch this film to get the best viewing experience. You have to go into this film not expecting anything as it paints itself as a horror but its not even close, it’s more of a comedy thriller. If you go into this film thinking it’s just a goofy/violent game of cat and mouse then you’ll much prefer this film rather than thinking its an off the wall, nut crunching blockbuster. It’s a fun one.

We are greeted with 2 children, running for their lives as you hear screaming in the background. The setting it a big, fancy pants looking house, the sort of house the national trust would preserve. As they run and hide, one of the boys meets face to face with a panicked man who asks for their help, just as this happens they are hit with a couple of crossbow bolts to the chest and dragged away. Cut to the future and we meet Grace (Samara Weaving (not margot Robbie as I kept thinking)), the bride to be to Alex (Mark O’Brien (also not Margot Robbie but this ones more obvious)). Alex is part of the Le Domas dominion, a family that made their riches through board games. On the night of their wedding at midnight, Grace must play a game with the family, dictated by a box that has been past down generations. The box pulls the card ‘Hide and Seek’ which kicks off a game of deadly cat and mouse where the family must hunt her down before dawn. 0 – 100 pretty quick huh?

This film is directed by Matt Bettinelli-Olpin & Tyler Gillett who I will certainly be watching for the future as they certainly know how to make a fun film. Like I mentioned before, not taking this film seriously is the way to go as there are quite a few goofy moments in the film which are genuinely laugh out loud moments, but the tone can switch in an instance, edge of your seat panic to a rib tickler within minutes. The comedy within the violence adds a nice juxtaposition throughout, sort of reminiscent of ‘Shaun of the Dead’ with the sort of comedy we have. Also finally, a recent film that knows how to have a comic relief, leave it to just one character to do that job, if every character is a comic relief then it just doesn’t blend but in ‘Ready or Not’ we have one character that it Alex’s brother in law and all these moments were great to split the tension.

As for the rest of the family, they are all there during the hunt, some more adamant in killing the bride than the others using an arsenal left for them by their great grandfather, Including rifles, crossbows and axes. There’s no time really to gauge a connection to any of the characters apart from Grace but again as I mentioned, it’s not the sort of film where you need to get invested in all their backstories to know who they are, all you need to know is that they’re ready to kill. All their acting fits the job but the standout during the film is Samara as Grace and that’s purely down to her scream, my god she has a good scream, its sounds pained and really hit home with the pain and panic she was feeling, I know it’s a weird detail to pick up on but it stuck with me.

As shes screaming I’m sure you’re already assuming that at some point she gets hurt and you’d be correct, she’s not the only one though. I’m not going to spoiler who gets hurt with what but if you’re looking for your blood fix then this is certainly in that bracket. Again, comparing it to ‘Shaun of the Dead’, I would rate the violence on that sort of level, I would say in this though it’s slightly more over the top, particularly as it reaches the final scenes. Some of the violence packs the most laughs so I’m not going to spoil what happens but the blood goes both ways in terms of serious incidents and hilarious incidents. There was one man in front of me who was getting a real hoot out of the violence.

Overall this isn’t a masterpiece of comedy, it certainly has its flaws, particularly one Incredibly obvious mistake where the editor should’ve been horse whipped because I don’t know how they didn’t pick it up. Other than that this film is just a good laugh, if you’re looking for an easy film that need to satisfy your gore hole then I would recommend this. It’s a good insight to seeing how messed up the rich are and how devoted they are to board games.