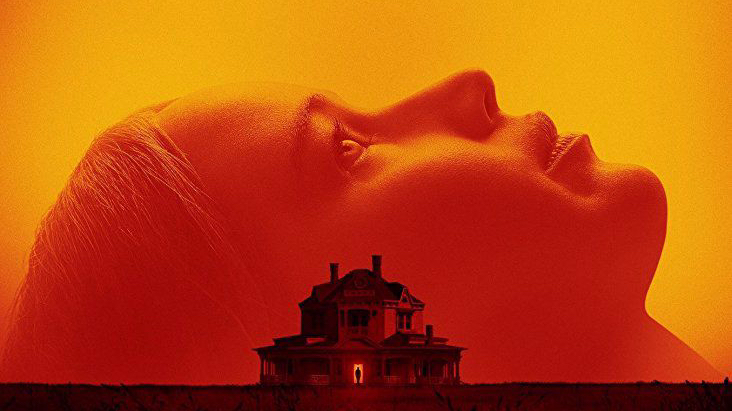 “You really do love him, God help you”

The first scenes of this film are saturated with foreshadowing; it opens on a dark, decaying bedroom which lightens as it comes into focus, revealing a young woman (Jennifer Lawrence) waking up. Jen lives in a huge house in the countryside that she has been restoring with her husband (Javier Bardem) who supposedly makes a living writing poetry. Bardem’s character keeps a precious crystal on a stand in his office and is very particular about who he allows in there. Lawrence’s character is plagued by dizzy spells and when she touches the walls of the house seems to visualise a beating heart slowly dying. It’s pretty clear from the off that there’s something a little fishy going on with these two… ‘Mother!’ is written and directed by Daren Aronofsky who is pretty well known for his dark and disturbing movies and this one fits that theme perfectly.

Jen and The Poet seem to be living a peaceful and secluded life until the arrival of one Ed Harris who claims he believed their home to be a bed and breakfast. The Poet asks him to stay the night and the two seem to hit it off; before long the man’s wife (Michelle Pfeiffer) appears at the door to join him. The Poet reveals to his wife that the couple are in fact fans of his writing and the man’s dying wish was to meet him. Despite repeated admonishment from ‘Mother’ (J-Law, in case you hadn’t guessed), the couple go into The Poets study and shatter his precious glass crystal. Bardem reacts with fury and boards up the doors to his study while Mother tells the couple they must leave their home.

At this point the film is dripping with Old Testament vibes which are cemented by the arrive of the couples sons who represent Cane and Abel. You all know the story, one brother bashes the other’s skull in with a rock, cheers bro! The Poet allows the family into his home after the funeral but the crowd becomes disrespectful and inconsiderate and Mother is forced to expel them all from her home. Mother and The Poet sleep together following a heated argument about their house guests. She wakes up and instantly she knows she is pregnant, which inspires The Poet to begin writing again. Whilst Mother prepares for the baby’s arrival, hordes of fans start to arrive at the house to praise The Poets work. Needless to say, Jen is not impressed!

The film really ramps up a notch at this point and I think you need to see it to appreciate and understand the films culmination. Whilst it feels very abstract and quite horrific to watch the film is a powerful commentary on the state of our planet and the way in which we treat Mother Earth. Aronofsky presents a damning picture of religion, The Poet represents a God who is always present when there is praise to absorb but frequently absent when Mother Earth truly needs him, perhaps Aronofsky’s God is a narcissist? It’s clear that the film is an allegory for the story of The Bible, The Old Testament includes Adam and Eve, The Garden of Eden and Cane and Abel. The influence of the New Testament is slightly less literal, whilst it includes the birth of Christ and partaking of his flesh, there is also clear comments on modern day society. As the house descends into turmoil, we see the influence of the media embodied by Kristen Wigg, military interventions and mass executions, poverty and human trafficking.

I have to say, I did like this film but not straight away and I definitely didn’t love it. It all feels very abstract and strange whilst you’re watching it. Events only start to fall into place once it become apparent that the film is an allegory and even so it’s still a real thinker. The film is well directed and acted but there were a few niggling issues that continued to bother me after the credits had rolled. The main issue that I couldn’t figure out was a yellow tincture that Mother made from an unidentified yellow powder and seemed to drink in order to quiet the visions and headaches she suffers from. This medicine is never identified or commented on and, although most people could probably disregard it, I spent longer than I’d like to admit trying to work out its relevance to the film. During the post-funeral gathering a man also decides to cut a cake with a spoon and this left me and the general public morally outraged. Lawrence’s character is well played but I suspect approximately 85% of her lines were ‘screams hysterically’.

I would give ‘Mother!’ 7 bloody, flesh lumps blocking the toilet out of 10