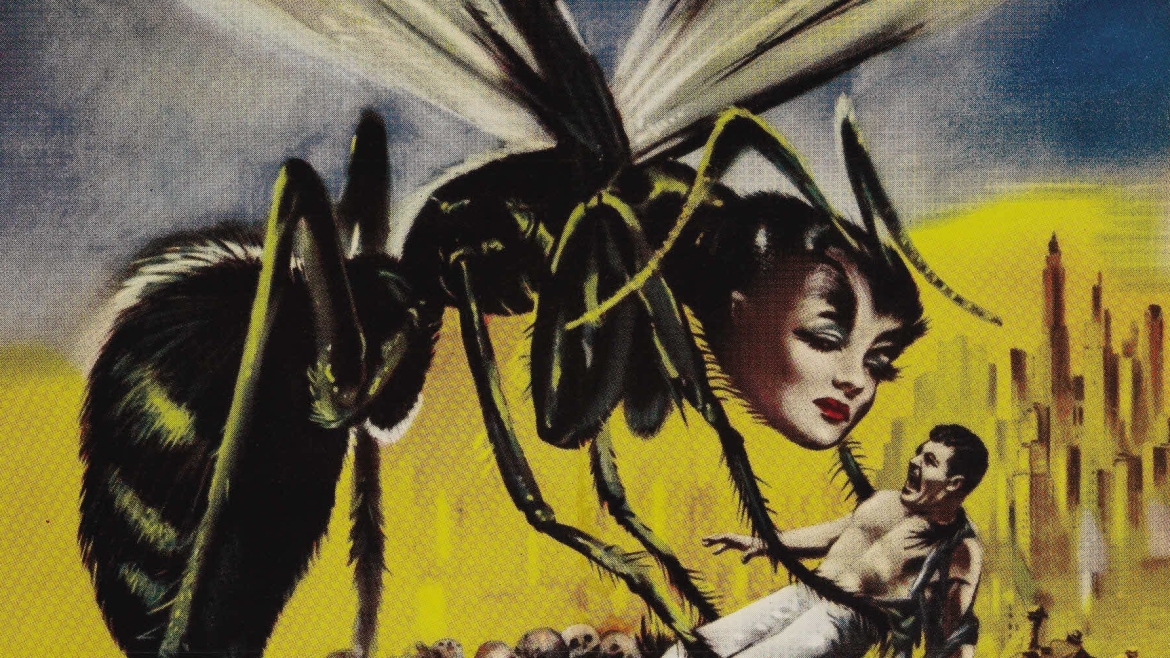 “I try to take my inspiration from the bees”

A scientist, who works for a cosmetic company, has finally cracked the formula for an exciting new product that shoots youth back into the lives of people who use it. Extracting royal jelly from wasps, the scientist learns by testing on animals that this jelly has the ability to halt the ageing process and then reverse it so the user becomes younger. The CEO of the company, Susan ( played by Janice Starlin), who is the face of the company with pictures of her on the products, decides to change the face to younger, Sprite young frilly. As profits drop since the move to younger face, Susan takes matter into her own hands and works along side the scientist with his new discovery. I’ll stop the description there, I’m sure at the point you can put two and two together with what happens in the rest of the story considering the title of the film.

I would definitely consider this film more of a C movie, it’s too waspy to be a B movie. Everything about this film screams that it had a budget of less than the cost it takes to make a kinder egg toy. I would say that I understand why it’s not as well made as films now days because its 1959 and its understandable that it probably hasn’t aged well but then I remember the 3 films I mentioned In the first paragraph and realised that no, you can make good films. The amount of times where I have up on the dialogue due to the sound quality being so poor that I only just understood what was happening, although most of the film I was watching with a pooch head tilt because I had no idea what was happening. Luckily the film has a very generic, horror flick story line to it that it was easy to follow, even when they were talking about wasp royal jelly and the sound quality was the same as if you were playing sound out of a Nokia sitting at the bottom of a Pringles can.

Taking technical quality out of the equation, let’s say it is due to the age of the film, the film is still pretty poor for being able to create an engaging story. With lackluster acting and novelty Halloween mask special effects, a lot of the experience was very dull and didn’t keep my attention, I found myself drifting away and forcing myself back into watching it. I think I got distracted most of the time because I felt as though I had already watched the film purely from knowing that the title of the film is ‘The Wasp Woman’. Fairly certain that she was going to turn into a wasp from that point. The metamorphosis into the wasp is nothing special either. From the front cover that I used for the main image, I was hoping for a flying wasp woman attacking the city. Unfortunately we get a real milky tea version where the CEO just gains a vaguely wasp looking mask and antenna (Shown Below). If the change was more intense like the transformation in ‘American Werewolf in London’ then the experience would’ve been more enjoyable. Also the obnoxious and horrifically annoying buzzing noises happening 89% of the film became tedious, but I guess that fairly true to wasps in general

Watching this film was just as enjoyable as having a wasp trying to sit on your food whilst at a picnic. Just the whole time wanting it to go anyway, swatting at it. I would welcome the wasp with open arms if it was funny but its just annoying. Just a lot of it didn’t make sense either, the whole wasp jelly reversing ageing was strange but it was particularly weird when the process of de-aging a Guinea pig turns it into a mouse was a very interesting choice. So overall I wouldn’t recommend this at all, Its predictable as all hell so I would just recommend reading the title of the film instead because you get the same amount of the story but you don’t have to waste you time.