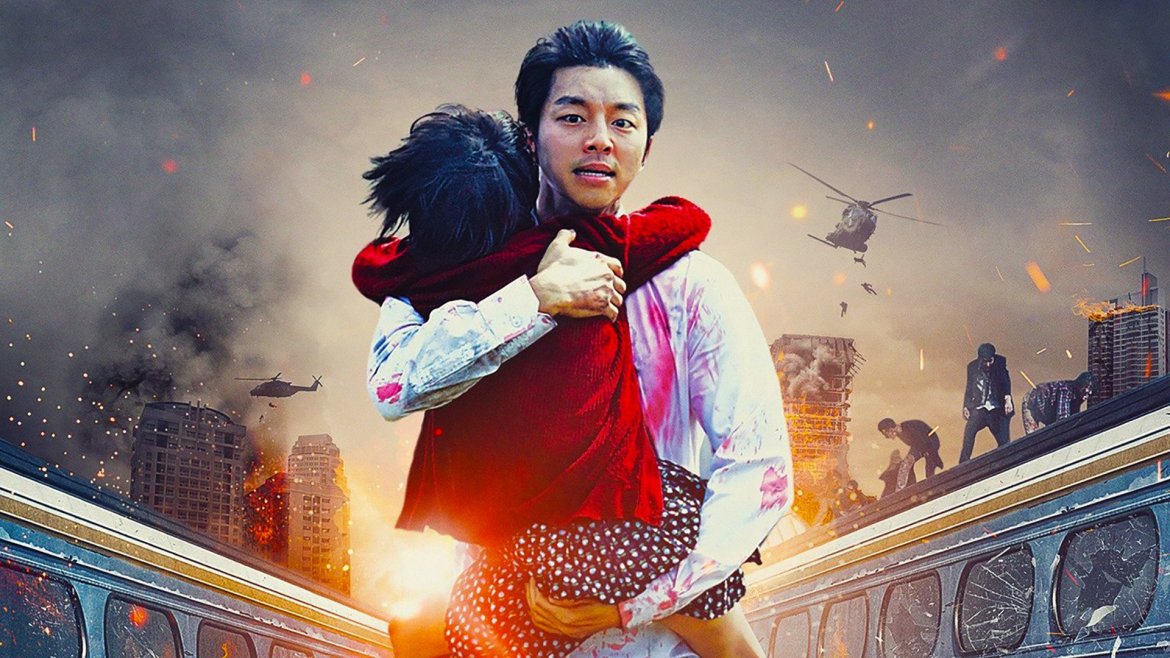 “Whatever you do, you must finish what you started”

Train to Busan (directed by Sang-Ho Yeon), is a Korean film about a father (Seok-woo) and daughter (Soo-an) on their way to see the daughter’s mother for her birthday, travelling by train on the 101. At the same time a virus is rapidly spreading across the nation to which the city of Busan is the only place that seems to have it under control. Passengers aboard the train 101 to Busan must fight together to battle back the hordes of infected that are on their tail.

This….. this is how zombie films should be done. This film is intense from start to finish. Well actually that’s a lie because the set up isn’t really intense but 10 minutes in until the end was one hell of a ghost train ride. This film does a great job of increasing the action along the way to build and build to become more and more frightening as it goes by. This film starts with the dead beat dad, the typical story of a father who spends too much time at work to focus on his daughter. You learn that he and his partner have split and the daughter lives with the father, which the daughter is not too pleased about as he spends all his time at the office whilst her grandma with achy knees takes care of her. For the daughter’s birthday she wants to see her mum who lives in Busan so the dad reluctantly takes a day off to take her there via a train from Seoul. An injured passenger boards the train as it sets off and things from there descend into a blood frenzy, blood here, blood there, oh GOD THE BLOOD!!! THE HORROR!!!!!

On the surface this is a very typical zombie film in terms of the story but the way that it is executed is dynamite. Normally in situations where there are a lot of characters I find it hard to get invested into anyone other than the primary and secondary main character and following their journey whilst everyone else is just there to add to the scale but this film was different; it had multiple characters I was fully invested in and was rooting to survive the whole journey and spoiler alert, it’s a zombie film, not all the main characters survived and I was genuinely heartbroken with 90% of the deaths, there was one I was very happy about because they really deserved to die.

The zombies in the movie take a lot from the type of zombies that are in 28 weeks later where they sprint towards anything that moves and they sprint fast. The twist of these zombies is that they attack anything they can see which is an interesting way to do it. At this point a zombie film is taking a typical zombie and giving it that one twist that sets it apart from just another boring old flesh nobbler. These zombies also have the added fright factor of just the way they move, the jarring, quick snapping limbs make for some genuinely unsettling zombies. Especially when it snaps its neck back to look behind it because it heard a noise. Shudders down the spine.

There was one scene in particular that I had to rewatch 3 times because I thought it just looked insanely terrifying and awesome at the same time. A moment in the train car where the infected are multiplying by the second by turning the passengers of the train into fleshy vending machines that dispense blood; they multiply to a point where there are dozens in one train car, chasing some non-infected to the point where they are viciously climbing over one another to get to them, creating a wall of terror and it was just insane yet the moment only lasts a few seconds. There was another moment near the end that was just as intense but I’ll leave that for you to see because I would highly recommend this film.

That moment I talked about was one time where the CGI looked good but there were some moments where it was a bit obvious and took me out of it, but only slightly. Not enough to completely distract from everything else that made this film amazing.

It’s good to see a horror film such as this have such depth that is lost in a lot of horror/zombie movies you have these days. Most films like this would focus on the action aspect and make it a total gore fest but this film didn’t rely on it, it relied more on the characters it built and the situations they were in that created some seriously tense moments. As well as having these moments there were also some genuinely emotional scenes as well which is again a tribute to this film focusing on the characters and not just having them be cannon fodder but actually having them be part of it.

Overall I would recommend this to any zombie fan and to be honest anyone who isn’t. It’s a genuinely great movie that does have some cliche moments but done in such a way that makes it feel new and that these people who you’ve fallen in love who die horrifically to the point where you’re choked up because you really wanted them to pull through till the end; die with meaning and not just because somebody thought of a creative way to kill someone and decided to chuck it in.

8 Tacky Ringtones out of 10

The Cat in the Hat