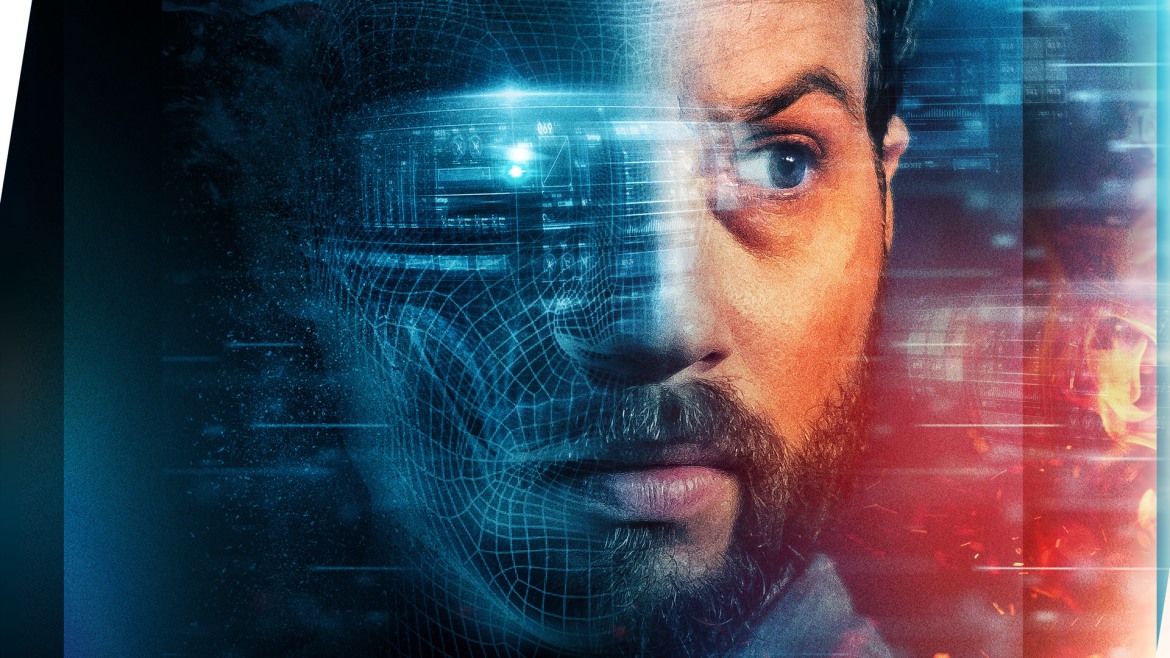 “There are some things machines can’t do”

Set in a dystopian not-so-distant future, ‘Upgrade’ follows Grey Trace (Logan Marshall-Green) after his wife Asha (Melanie Vallejo) is killed in a mugging that leaves him paralysed from the neck down. The beginning of this film depicts Grey as a technophobe who prefers to work on his old Pontiac Firebird over the futuristic self-driving vehicles favoured by his wife. We see Grey struggling to adapt to life as a quadriplegic with his independence replaced almost entirely by technology and, despite the support of his mother Pam (Linda Cropper) he attempts to end his life by overdosing on medication; even that is administered by a robotic household appliance. I felt that Logan Marshall-Green portrayed the characters suffering brilliantly, although he does look a little like a Tom Hardy and Ansel Elgort’s love child which was slightly distracting.
Tech mogul Eron (Harrison Gilbertson) offers Grey an unusual opportunity to gain his independence back and exact revenge on the muggers responsible for Asha’s death. Under Eron’s watch, Grey undergoes an operation to have a multi-purpose microchip by the name of STEM implanted in his neck to bridge the gap between his mind and body, hopefully enabling him to walk again.

With STEM’s assistance, Grey gets more of an upgrade than he bargained for as the chip in his neck is able to take full control of his body when he gives it permission to do so. Although Grey Trace once lived an almost technology free existence, it appears that tech is ultimately what has saved him. The upgraded Grey tracks down each of the muggers involved in Asha’s murder leaving a trail of very satisfying, gory deaths in his wake. Eventually, STEM and Grey find that the accident that rendered him paralysed was in fact a hit, paid for by Eron and his tech company, but all is not what it seems when Grey goes to confront him…
Overall, I found ‘Upgrade’ to be a great, easy watching kind of movie. I was immediately hooked by the Bladerunner style of the landscape and panning shots over the city. My favourite element of the cinematography was that when STEM was in control of Grey’s body the filming took on an RPG perspective as though in the middle of gameplay. In my opinion this was the perfect way of subtly yet clearly show that the machine was the one in control. The development of STEM was particularly interesting; without giving too much away, there is a shift from symbiosis to autonomy and I’m impressed at the level of character development the micro-chip manages to achieve. Despite starting the film with some pretty heavy emotional scenes, director Leigh Whannell succeeds in lightening the mood with moments of black comedy. My favourite example of this is during a bar fight in which Trace exclaims ‘you though I was an invalid, but you didn’t know I’m a fucking ninja’- I always approve of some well-timed banter. I’m doing my best to avoid spoilers but I feel the need to mention that I loved the ending of this film; I really think it’s the only way it could end and I think you’ll see what I mean if you watch it yourself.

Whilst good fun and full of sci-fi flare, ‘Upgrade’ is not without its flaws. The most significant of these is the slightly simplistic storyline and I have to admit that I guessed the ending with an hour and ten minutes of the film left to watch, not ideal! The acting skills of the surgeon that assesses Grey after his operation has the emotional range of a doormat and should promptly be banished from the world of cinema, you’ll know who I mean. A few minor editing slip ups were present if I’m being picky but, all in all I enjoyed the cinematography. Side note: the hacker who helps Grey when STEM is being remotely shut down, looks like the third, lesser known member of Die Antwoord.

I would give ‘Upgrade’ 8 Fisk’s Moustaches out of 10