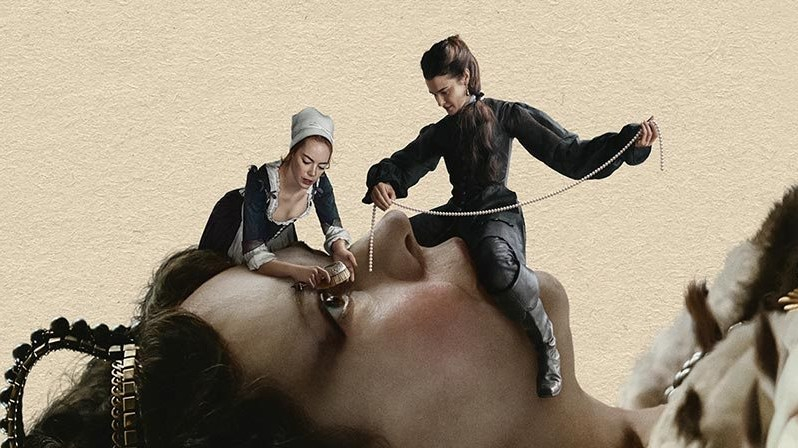 An 18th Century dark comedy directed by Yorgos Lanthimos; ‘The Favourite’ follows the battle between Lady Sarah of Marlborough (Rachel Weisz) and Abigail Marsham (Emma Stone) as they vie for the attention of Queen Anne, played superbly by Oscar winner Olivia Coleman.

Queen Anne is a women of questionable mind and body who acts as a political puppet to her advisor and lover Lady Sarah who manipulates her in order to control parliament from behind the scenes. Their relationship is thrown into disarray following the arrival of Sarah’s cousin Abigail who has, in her own words, fallen far from the life she was once used to and seeks a job as scullery maid. In this farcical world of aristocratic debauchery and extravagant wigs a rivalry unfolds between Sarah and Abigail as each one grows ever more desperate to win the queens favour.

Every second of this film positively oozes Lanthimos, from the chapter titles to the smattering of C-bombs littered throughout the script. The cinematography is so unique with prolific use of a wide angled lens, somewhat of a trademark for cinematographer Robby Ryan. The use of a fish eye lens creates the illusion of looking in from the outside, like a fly on the wall of a warped reality. I also loved the use of panoramic whip shots- a dizzying entrance to several scenes throughout the film. ‘The Favourite’ was shot entirely using natural light and many scenes rely totally on candlelight giving certain scenes a brilliant intimacy. Large windows are used to flood rooms with light which is wonderfully opposed by dark candlelit scenes in the castles labyrinthine stairways and passages.

I find it hard to believe that ‘The Favourite’ did not win the Academy Award for costume design. I seriously appreciated the subtle use of colour to depict the opposing sides of parliament, white and blue for those in favour of a peaceful end to the war versus black and red for those promoting further battle. The set design has a phenomenal level of detail, from the walls in Queen Anne’s bedroom to the ornate design of Lady Marlborough’s drawing room. The film warrants a second watch if only to notice all the intricacies you missed the first time around.

Three female leads in a film is truly refreshing and the portrayal of each character is absolutely nailed by the leading ladies; none more so than Olivia Coleman’s role as Queen Anne. Anne suffers with gout and as her physical condition continues to deteriorate, so too does her mental state. She oscillates from a petulant, sulking infant in one scene, to being violent and suicidal in the next. Her mood swings are as capricious as The Queen of Hearts and the parallels with ‘Alice in Wonderland’ don’t end there. In true Yorgos style the film is most definitely surreal; featuring a bizarre, macabre duck race and one character referred to in the credits as ‘Nude Pomegranate Tory’- I’ll leave that one to your imagination! The fish eye lens exacerbates this and is beautifully complemented by the score- a combination of classic and gothic inspired pieces used to build tension in all the right places.

Abigail begins to insert herself into Queen Anne’s life and soon usurps Sarah as both lover and friend. Not only do the characters shift in relation to Queen Anne’s favour but also that of the audience. I found myself seeing Abigail as innocent and caring at the start whereas Sarah comes across as controlling and harsh. It soon becomes clear that both women will stop at nothing to get what they want and although motivated by different reasons, both are fixated on winning the affections of Queen Anne. The development of all three leading characters was strong and by the end of the film I felt almost sorry for Sarah and found myself seriously questioning whether Abigail was completely lacking in the soul department and requires lifetime imprisonment after she squashes a rabbits neck with the heel of her shoe!

If you’ve seen ‘The Lobster’ or any of Lanthimos’ previous works then you’ll know he’s a fan of the inconclusive ending. I think in the case of ‘The Favourite’ this had a love hate relationship for audiences. Personally, I really liked the ending, I would go so far as to say that it was the only ending that I would have been satisfied with.  Sarah has been banished by the queen and Abigail is left to take her place. Having climbed up the social ladder since she arrived in court she has her status as a lady restored and is obliged to tend to the queen. The final scene sees her reluctantly bending down to rub the queens leg as she suffers an attack of gout. To me this scene showed that Abigail has made her bed and now she must lie in it, landing herself in yet another submissive position. Queen Anne has also made a rod for her own back in a way by sacrificing the safety of her tried and tested relationship with Sarah in favour of Abigail who has very different ambitions. The film fades out with a wave of realisation slowly washing over the faces of the two women.

The only thing in this film that really shattered the illusion for me was the total lack of acting skill displayed by some of the supporting cast members. In particular, one scullery maid gave such a lacklustre performance that I would not be surprised to find out that she was a random member of the public that had got lost and found herself on the set. If shes not related to one of the casting directors then whoever hired her deserves six lashings with the birch! Having said that, the rest of the film is of such a high calibre that I can almost forgive but not quite forgive it enough to give the full 10.

I would give ‘The Favourite’ 9 Hildebrandt’s Day’s out of 10.